When travelling to the south of Germany, to the Bavarian region of Garmisch-Partenkirchen, Oberammergau, and Mittenwald, you will not only be stunned by the beautiful mountain scenery, but you will also notice the colourfully painted houses with their wooden balconies overloaded with flowers. Sometimes, the doors and windows of the houses are surrounded by floral ornaments, other houses have huge paintings with religious themes, natural scenes or portrays of the owner of the house. These mural paintings are called “Lüftlmalerei” and are a folk art tradition dating back to the 18th century.

If you happen to be in the area, you could also visit the Zugspitze - Germany's highest mountain top. Check out our article about a trip to Zugspitze here!

The word “Lüftl” means “little air”, while “-malerei” is the German translation of “painting”. However, the origin of this term could not be determinded by any certainty. One explanation refers to Franz Seraph Zwinck (1747/48–92), the painter of impressive mural paintings between Mittenwald and Oberammergau, whose family residence had the name „Lüftl“. Others claim that “Lüftl” (air) rather relates to the painters working in lofty heights while creating their artwork.

The styles of “Lüftlmalerei“ have considerably changes over the course of time. They range from traditional mural paintings in Baroque and Rokkoko style to architectural paintings with simple door and window ornaments to fully painted houses with a religious motifs. Some paintings only show the name of the house, others have lyric lines or simply portray the patron saint. 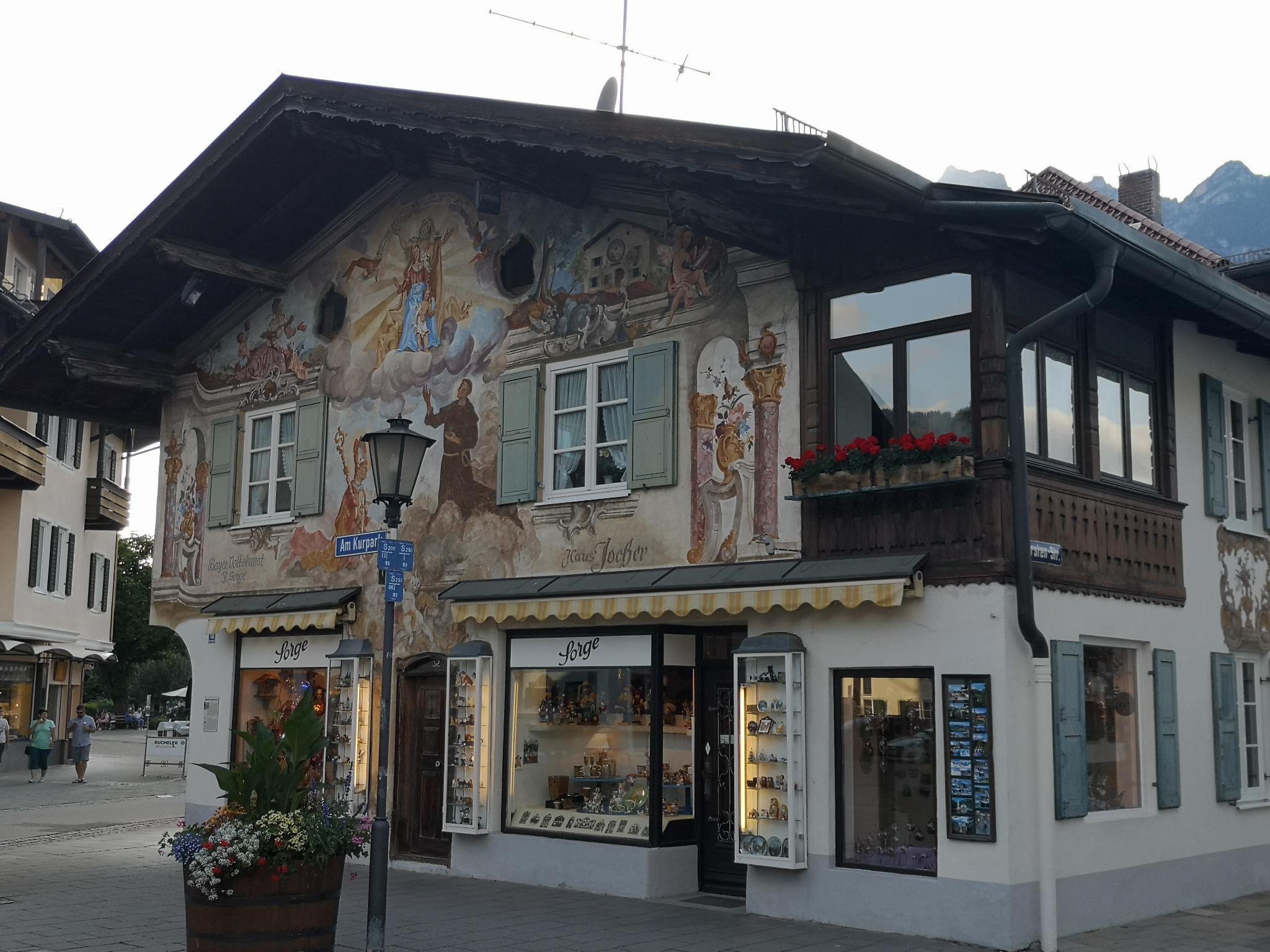 The idea of mural decorations dates back to the ancient times and aimed at giving buildings an additional illusion of architecture by painting figures or ornaments on their murals. The Bavarian region, however, has been artistically influenced by Italy where buildings have been colourfully painted from the beginning of Renaissance to the end of the Baroque.

The painters were skilled workers who mixed their own colours and were perfectly familiar with the effects occurring once the colour, painted on wet plaster, had dried and did not allow any modifications. The paintings itself are very sustainable so that many originals could be preserved until today. As the restauration is very time-consuming and expensive, however, some precious artworks have been covered with paint by the owners of the houses to save the time and money for their restauration.

In the 18th century, the mural paintings have been a way of expressing one’s wealth and prosperity. The larger and more colourful the paintings were, the richer was the owner of the house. The artworks of “Lüftlmalerei” have also been admired by the well-known German poet Johann Wolfgang von Goethe (1749-1832) when he crossed the Alps during his famous trip to Italy in 1786.

Today, the handicraft of "Lüftlmalerei“ is on the brink of extinction. Only few people are still aware of the the origin and importance of this folk art, and fewer are still interested in learning and preserving it for the future. The knowledge about “Lüftlmalerei” is usually passed on from one generation to the next. There is no vocational training, and only few painters are left who share their skills and knowledge with interested disciples. Let us therefore hope that this fascinating tradition will still be kept alive for al long time, as the charming villages in Southern Germany cannot be imagined without them.

If you can't get enough of the enchanting murals, you should check out these two websites www.gewoelbegestaltung.de  www.bildhauerarbeiten.de. Let us know in the comments what you think about this century old German tradition. Make sure to also visit the New2 FORUM to connect with others!