The public transport in Bengaluru has been repeatedly criticized in recent years – traffic jams, rude bus and taxi drivers and high ticket prices. But Bengaluru is now investing a lot into the public transport system. The two existing metro lines are already a great relief for the roads which are heavily relied on in the infrastructure. Several more metro lines and a system with main junctions connecting different modes of transport are expected to bring further ease in the near future.

But until this plan is fully implemented there are a few things to keep in mind while travelling in Bengaluru. During rush hours you have to schedule a lot of time even for short commutes. In general, you won’t get around easily unless you plan carefully where to go when. That’s why we would recommend staying as close to your workplace as possible. That way you might be even able to take your cycle to work. Additionally, it makes sense to pick up some basic Kannada (Karnataka’s official language). A lot of rickshaw, taxi or bus drivers will only speak Kannada to you.

Getting around by bus

The BMTC (Bengaluru Metropolitan Transport Corporation) is responsible for bus transportation within the city. On their website you’ll find useful information on tickets, stations and the best connections for getting around. Equally useful is their app MyBMTC. For trips outside of the city you should choose the busses of KSRTC (Karnataka State Road Transportation Corporation).

One of the central junctions is the Kempegowda Bus Stand right opposite of the central train station. You might also know it under the name of Central or Majestic. From here the red inner-city busses of BMTC as well as the state-wide busses of the KSRTC leave and arrive. By the way, the green busses take you to the suburbs of Bengaluru.

In case you don’t have a monthly or yearly ticket and you want to buy a single ticket on the bus, you should always carry coins and small denominations of rupees with you. The conductors on the bus will not return change. So if your ticket costs INR 100 and you give INR 500, you’ll make the bus corporation 400 Rupees richer!

Getting around by Metro

The pride of finally owning a metro shows in the designated name ‘Namma Metro’ (our metro). Currently only two lines are running, but until 2025 three more lines are to be opened which will ease the transport in Bengaluru even more.

The Purple Line connects east and west from Baiyyappanahalli to Mysore Road and the Green Line covers the north-south axis from Nagasandra to Anjanapura. Both have a halt at Majestic.

During the rush hours the metro is overcrowded although it runs every few minutes. And even at the beginning (5am) and end of the day (11pm) it runs with a frequency of 20 minutes.

Single tickets can be purchased as tokens at every metro station. These tokens contain information about your ticket and you have to return them while leaving the metro station. Alternatively you can get a Smart Card which will be charged only for the rides you do. Additionally, the Smart Card grants you a small discount on the ticket fare compared to the tokens and you might be less likely to lose it. In the Namma Metro app you can recharge your Smart Card easily, check the metro’s timings and find the closest station to you. The Smart Card can be also recharged at the metro stations themselves. 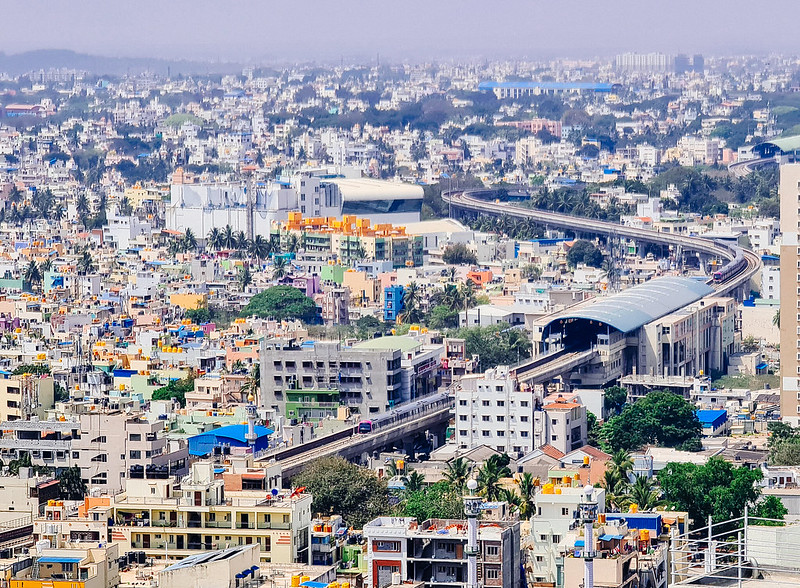 Getting around by Rickshaw and Taxi

Most of the public transport in Bengaluru is still operating on the streets. That’s why rickshaws and taxis are among the most important modes of transport. Unfortunately, only few rickshaw and taxi drivers are willing to use a taxameter and state arbitrary prices. Even finding a taxi which takes you where you want to go can be a hustle since the drivers are quite picky.

That applies for taxi apps like Uber and Ola as well. Rides are often cancelled and are more expensive than in other cities. Nevertheless you save yourself the tedious process of negotiating because the app calculates the price according to distance and demand. In Bengaluru it is common to share an Uber or Ola to reduce the cost for each passenger.

Did you know that Ola originates from Bengaluru and is a serious competitor for Uber. Read more about Uber and Ola in India!