A city like Mumbai with over 20 Million inhabitants can be overwhelming. We help you with this little guide about the public transport in Mumbai to not get lost and be able to enjoy the mega city to the fullest.

Mumbai is a peninsula – just like New York – and is stretching from north to south. The southern part of the city is called South Bombay (or SoBo) and everything north of that is the suburbs. Every morning it feels like the whole city is moving from the north to the south when employees commute from the suburbs to the business district at the very southern tip of the peninsula. The same goes for the evenings when after a long day of work all they want is to finally get home.

A fantastic help for getting around in Mumbai is the app m-indicator. Here you can track metro lines, check the timings for the local trains, calculate the price for a cab ride and choose a bus which takes you exactly where you want to go.

The Mumbai Suburban Railway is the oldest railway system in Asia and quite accurately is called the lifeline of Mumbai. Local trains are essential for commuters from the suburbs to the business districts of the south. An overwhelming number of 7 Million people per day squeezes into the local trains which are bursting at the seams during rush hours.

There are 3 lines – the Western Line with the terminal station at Churchgate and the Central and Harbour Line with the terminal station at CSMT (Chhatrapati Shivaji Maharaj Terminus/ CST/ Victoria Terminus/ VT). These lines cater to the different suburbs and can be distinguished by the amount of stations they halt at. The fast trains (designated with F) only stop at a few main stations, whereas the slow trains (designated with S) stop at all stations. To make it even more complicated the semi-fast trains (designated with SF) stop only at all stations in the south and later only stop at certain stations. Carefully read the destination boards on the platform which tell you where the incoming train will halt.

Moreover, in every train you have cars of first and second class. Make sure you’re in the class you bought a ticket for. Being caught riding in first class with a second class ticket can cost quite a fee. Other special cars are the ones for ladies (first and second class), disabled and old people and cars for transportation of goods. There are even whole trains which only allow women to board (ladies special). But they run very rarely.

On the Western Line there is an AC fast train which you need a special ticket for. All the other trains run with open doors and windows for natural ventilation. During the monsoon they can be shut.

The 3 lines run from 4am to 1 am. The rush hours are between 7am and 11am and again from 5pm to 9pm. During these times the trains are super crowded and it’s easy to get lost. So if you can avoid travelling during rush hours.

If you have no choice and you have to travel in the rush hours, here are some tips and tricks: Use the first class – although crowded as well, it is not as crowded as the second class. As a woman you should always use the ladies' compartments. On the platforms you will find signs which designate the spots for ladies or you can just follow the colours of their sarees and kurtas.

To board and get off the local trains is the trickiest part of the ride. Don’t be intimidated by the clamour of the other passengers. The ones who jump off the train while it’s still running just want to announce their arrival and the ones jumping onto the train at the same time equally want to give a warning. Abandon your polite containment and just try to go with the flow! When you’re in the train it’s best to directly ask other passengers on which side you have to get off according to your station. Because if you start squeezing through the masses once your station is announced you will have a lot of trouble descending. Important: Stay calm, hold your bag close to your body and let the others help you!

You will get the tickets for the local trains at the counter of every station. Just state your destination and if you are already planning to go back the same way add ‘return’. An order might therefore be ‘Bandra – Churchgate, return’. Alternatively, you can get a Smart Card which can be recharged and used to buy tickets at the vending machines. For tourists there are 1-day, 3-day, or 5-day tickets. If you are travelling on a regular basis you can also purchase so-called season tickets for one or three months or even for a year. 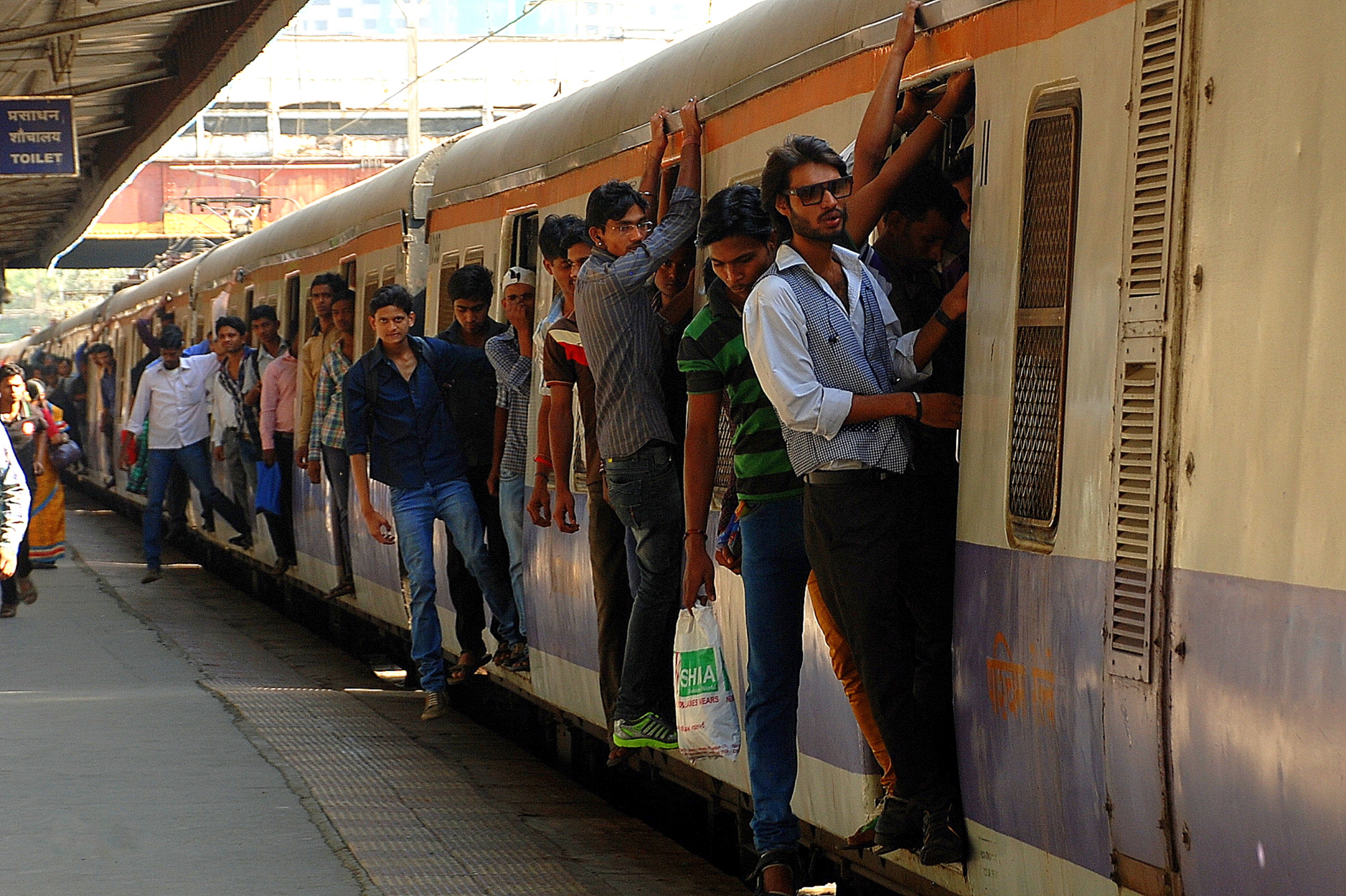 The metro is not yet very established as a public transport in Mumbai since it only operates one line. But as soon as more lines are available the metro is supposed to provide a great relief for the overcrowded local trains. Mumbai is already dug up for the new lines and new stations – still, the construction is already delayed.

The one and only Blue Line 1 of the metro operates between Versova in the northwestern Suburbs and Ghatkopar in the northeastern part of the city. Tickets are available at the stations, with the Smart Card or the app ‘Q’. The Blue Line operates from 7am until 9pm.

The monorail system consists only of one line with more in planning. This line runs from Chembur to Vadala  in the eastern suburbs (6am until 10pm, frequency of 15 mins).

The monorail poses a great relief for Chembur as it is often congested by loud and slow busses. Tickets are available at all stations either at the counter or the vending machines.

The public transport in Mumbai is perfected by the bus transportation system which is one of the best in the country. The name already indicates that – BEST (Brihanmumbai Electric Supply and Transport). The mostly red busses run through the whole city up to neighbouring urban areas. For the suburbs additional Bus companies ensure a full coverage of the east-west axis. You will find all bus lines in the m-indicator app.

Single or day tickets can be purchased in the busses. For that you should make sure to have some coins as change which the conductors will ask from you. Oftentimes, the line numbers of the bus are only indicated in Hindi or Marathi. So it’s worth a google search to see what sign you should look out for. It’s always best to confirm whether the bus is going to take you where you want to go when entering.

To be able to quickly check out the Hindi or Marathi signs an Indian SIM card can be helpful.

The prominent black and yellow (kali-pili) taxis are a popular means of transportation throughout the city. They are not only cheap but perfectly complement the rest of public transport in Mumbai. At every train station you will find taxis which sometimes can be even shared with other passengers – e. g. at Churchgate they are lining up to shuttle business people to Cuffe Parade where a lot of companies have their offices.

Even though the city has given orders that free taxis have to take every passenger regardless of their destination, that doesn’t always work very well. If they agree to take you, make sure the driver turns on the taxameter (short meter). Don’t agree to negotiate with the driver if he doesn’t want to go with the meter, better search for another taxi instead. In the app m-indicator you can check the approximate cost for your route.

While crossing the Bandra-Worli Sealink you have to pay the toll of INR 70 on top of the Taxi fare. That poses a great opportunity to exchange a 2000-Rupee note!

The alternative to kali-pilis is booking a taxi via one of the taxi apps like Uber or Ola. Their cabs are air-conditioned most of the time. But be aware that the price changes according to the demand. We would not recommend relying on these taxis when the demand is high, because you are likely to pay twice as much as in a kali-pili taxi.

Check out how Uber and Ola work in India and what you can expect!

The ride with a taxi in Mumbai is always quite a special experience – individual and creative decorations with figures of gods, nice-smelling flowers, crazy light installations, colourful cushions and extravagant interiors. Moreover, a talk with the driver is worth trying. 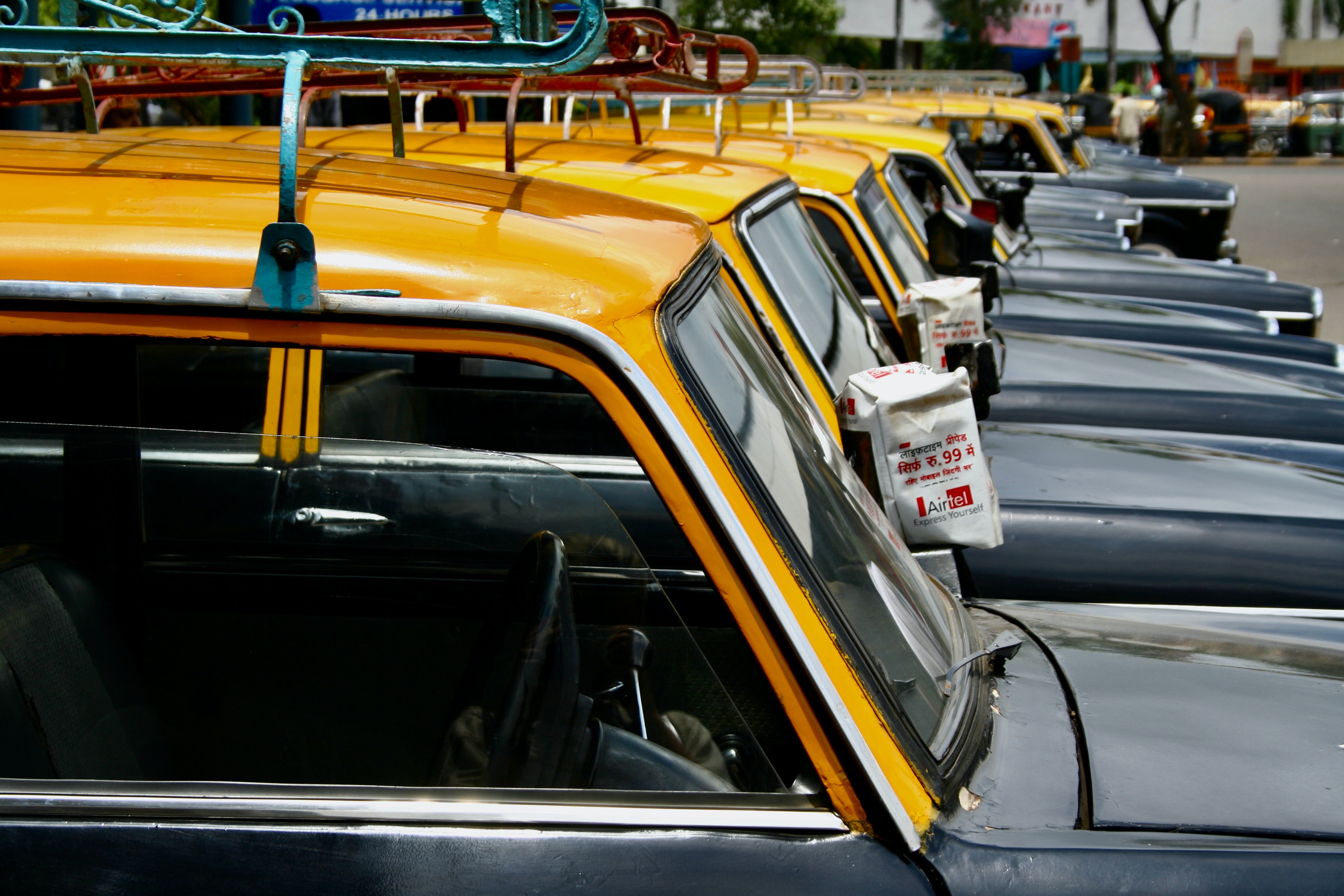 South of Bandra and Sion Rickshaws are not allowed to run in Mumbai – here you have to revert to taxis. This decision has been taken to ease the traffic and to beautify the image of South Bombay.

Auto-Rickshaws are exactly like taxis, only on three wheels and therefore much more agile. But even with Rickshaws you should always insist on going by meter. Compared to other Indian cities there are a lot of Rickshaws in Mumbai, so going by meter is common. If a driver is too stubborn often the next one is not really far.

When riding the Rickshaw you should be cautious about not losing bags or phones since there are no doors. The maximum of three passengers in one Rickshaw is followed strictly in Mumbai.

Since the city is surrounded by water, ferries complete the list of public transport in Mumbai. Be aware though that the ferries are not running during the monsoon season from June to September.

There are different wharves in the city from where ferries cover every direction. From Mora Jetty in Navi Mumbai to the Mumbai Ferry Wharf or to Elephanta Island you have a great view of the city.

Other ferries leave from the Gateway of India to drop you off at Elephanta Island, Mandwa (from where you can reach Alibaug) or Rewas. The duration of the rides are mostly one hour and leaving the city behind is truly making for a great weekend getaway.

In the northern suburbs there is also a ferry to cross Manori Creek (Manori → Marve Beach). Since nowadays you also have a bridge to cross that creek, the ride with the ferry is just offered for curious travellers.

Now you should have a comprehensive overview of the public transport in Mumbai. All the different rides have a charm of their own. Please feel free to share your experience with getting around in Mumbai!

Holi - Festivals of Colours in India

The Women's Movement in India