Holi - Festivals of Colours in India

Holi is one of the most famous Hindu festivals, which is celebrated not only in India, but all over South Asia and the world in the diaspora. You have probably even heard of Holi festivals in Germany. Colours, music and an exuberant atmosphere are an essential part of it. But did you know that Holi has a centuries-old tradition in India? Find out where Holi comes from, what myths are behind it and how it is celebrated in different parts of India in this article!

Listen to our podcast "All about India" with Steffi, in which she explains the Holi Festival in German!

Holi, like other festivals, is a spring festival. It takes place 40 days after Basant Panchami and also celebrates the beginning of new life. Spring represents a new phase and is celebrated on Holi with exuberant dancing and lots of bright colours. In many parts of India, the festival even lasts several days. Regardless of the mythological meaning, almost everywhere the festival Holika Dahan is celebrated one evening before Holi. The next day is the climax of the Holi festival in India with many bright colours.

The festival Holika Dahan is also called Little Holi (chhoti holi). It has its origins in Hindu mythology and derives one of the reasons for the Holi celebrations from it.

The story is one about worshipping the gods and the victory of good over evil. King Hiranyakashipu and his sister Holika worshipped the god Brahma. As a reward, Brahma gave Holika a cloak that protected her from being burnt in fire. Hiranyakashipu asked Brahma to make him immortal. But Brahma refused him this favour. The king still wanted to attain immortality and so he asked Brahma to let him determine the conditions of his death. Brahma agreed and so Hiranyakashipu decided that he could not be killed by day or by night, outside or inside, by a hand weapon or by a projectile, or by a man or a god or an animal.

Are you interested in the Hindu gods? Then listen to the podcast "All about India" to learn more about the god Brahma (in German)!

Hiranyakashipu now felt all-powerful and demanded that his subjects worship only him. However, the god Vishnu was extremely popular and even the king's son, Prahlad, was a faithful worshipper of Vishnu. This made the king so angry that he decided to kill his son. To do this, he devised a ruse with his sister Holika. She sat down with her cloak on a pile of logs. She took the young king's son Prahlad on her lap and asked him one last time if he wanted to renounce Vishnu and worship only his father. But Prahlad remained loyal to Vishnu. The pyre was lit, but with Vishnu's help, Holika's cloak wrapped protectively around little Prahlad and Holika burnt to death.

On Holika Dahan, large fires are lit in which a Holika straw doll is symbolically burnt as evil. All the negative energy, bad intentions and the burden of the people is burnt in these fires. There are usually boisterous celebrations with music and dances around the fire.

By the way, the king tried to kill little Prahlad many more times, but each time the boy was saved by Vishnu. Finally, Hiranyakashipu was killed by Vishnu in the form of Narasimha, who was half-man, half-lion, at dusk on the threshold of his palace with a blow from his paws.

The biggest holiday of the Holi festival is the day after Holika Dahan. In many parts of the country, there are prayers and festive food as well as the play of bright colours. People meet in the streets and throw water and coloured powder at each other. But what is it about the bright colours? There are several explanations.

One reason for the coloured paint powders is their medicinal use. In the past, all colour powders were made from natural and even medicinal ingredients - turmeric root for yellow, beetroot for red and dried plants for green. As the weather changes around Holi and spring announces itself, many people catch a cold. The natural colours and the healing ingredients they contain are supposed to strengthen the immune system. But beware: nowadays the colour powder is often produced synthetically and can even be harmful to health!

Another reason for the colourful game is to celebrate spring. The bright colours symbolise the blossoming of nature. All negative energy is chased away and a new phase of life begins. In return, disputes are to be forgiven and forgotten and the victory of good over evil is to be remembered - just as Vishnu was victorious over the cruel king Hiranyakashipu.

Another popular explanation for the colours is found in a mythological story. The god Krishna fell in love with the beautiful Radha. But he was afraid that she would reject him because his skin colour was darker than hers. Therefore, he asked her to dye his face with powder so that he would be more pleasing to her. From this, the play with colours developed and for this reason Holi is also called the festival of love. A modern interpretation is that through the colours on people's faces, all differences are erased - everyone is equal when playing Holi, regardless of caste, age, origin or social position.

After the colour play, people wash themselves and wear new clothes during prayers at home or in the temple. Special food is prepared to celebrate the day and in the evening people get together with family and friends. A particularly popular drink at Holi is thandai, a sweet milk with spices, dried fruits and nuts. This, together with marijuana, becomes a bhang lassi, which is especially popular with young people. 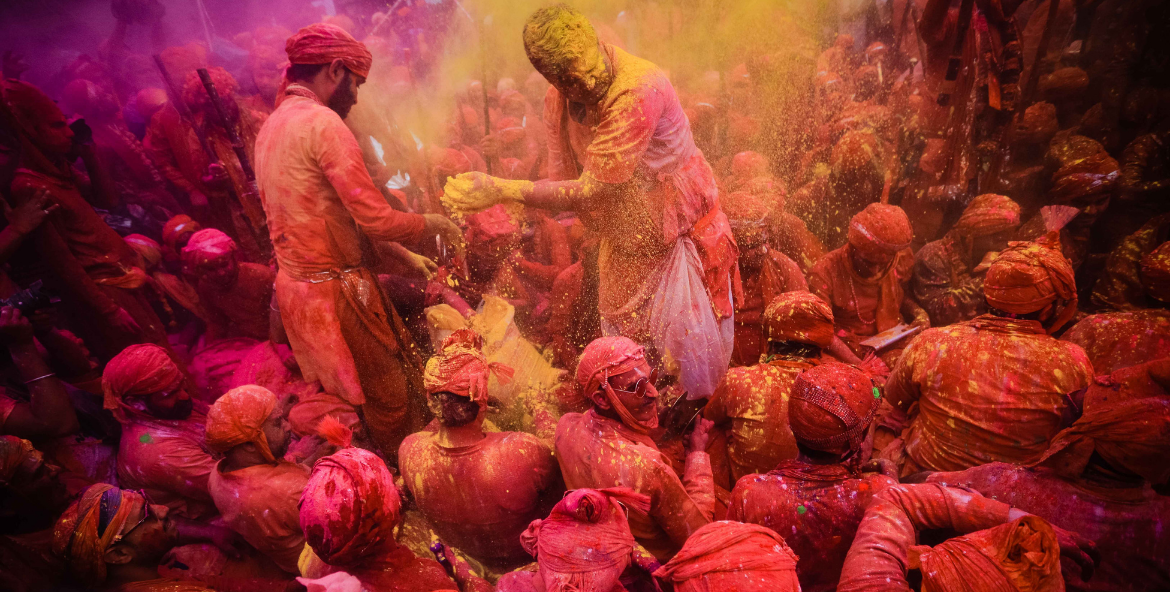 Holi is celebrated in most parts of the country. However, there are different names for the festival and different customs depending on the region. In the north of the country, it is mainly Radha and Krishna who are celebrated. Especially in Mathura, the birthplace of Krishna, there are huge celebrations that last for a week. In the birthplace of Radha, Barsana, women in particular play an important role during Holi. In Kanpur, the Ganga Mela or Holi Mela is celebrated on the last day of Holi.

If you want to know more about the state of Uttar Pradesh, where the three cities mentioned above are located, check out our article here!

In Punjab, people paint and decorate their houses especially festively for Holi. These so-called Chowkpurana paintings feature flowers, peacocks and geometric shapes, similar to the Rangolis in South India.

In West Bengal and Odisha, Holi is called Dol Yatra and lasts up to a week. Here too, the love of Radha and Krishna is celebrated. In Odisha, the particularly important god Jagannath is honoured. Further east in Manipur, the spring festival Yaosang is celebrated for six days at the same time. Children go from house to house during the festival to collect donations, folk dances are performed and the celebrations in Krishna temples are particularly splendid.

In South India, Holi is also called the festival of love, but instead of Radha and Krishna, Kama and Rati are celebrated here. The love god Kama was killed by Shiva on one of his ventures. As a result, Kama's wife Rati was so distraught that she begged Shiva to bring her husband back. Of course, Shiva granted her this wish and hence the reunion of the two lovers is celebrated on Holi. Check out the full story in our article on Basant Panchami!

Especially in Telangana and Tamil Nadu, the story of Kama and Rati has a great significance for the Holi festival. In Telangana, the festival, called Kamuni Punnami here, lasts for ten days and ends with the play of colours on the last day. In Tamil Nadu, many marriages take place on Holi, as the festival of love is auspicious. In Goa and Maharashtra, the spring festival Shigmo or Shimga is celebrated. Nevertheless, even here people do not let themselves be deprived of the fun of the colourful play of colours.

Our tips for Holi in India

If you want to be inspired by movies, we can recommend the films Ram Leela and Yeh Jawaani Hai Deewani. The scenes of the Holi Festival in these movies really whet your appetite for Holi. If you are celebrating the festival in India, however, you should be a little careful. Avoid huge crowds, as the celebrations can turn from exuberance to ecstasy, especially as there is often a lot of alcohol involved. Especially if you are a woman, it is best to join only groups of other women.

On the day of Holi, wear clothes that you are not too fond of. This is because the colours can be very sticky and difficult to wash out, especially when mixed. White clothing allows the colours to shine most beautifully. Also be prepared for your skin and hair to absorb the colour. For blonde hair, we have a special trick: rub coconut oil on your hair and leave it in as a protective layer while you play with colour. This makes it easier to wash out the colour later and it won't stay blue for weeks.

Do you have any questions about Holi in India or would you like to share your experiences and tips with us? Then feel free to write to us in the comments or to [email protected]!