In Germany, India is well known as a stronghold of the IT industry as well as for the many highly educated workers belonging to the fields of mathematics, computer science, natural sciences and engineering. But a closer look reveals that the Indian workforce and companies are a lot more diverse than the cliché of gigantic open-plan offices with hundreds of call centre employees would suggest.

In contrast to the widespread prejudice, India has made great progress in many sectors of the economy within recent years and has achieved many impressive successes. For example, the digital industry as well as the start-up scene belong to the most dynamic in the world. In 2021 alone, 44 Indian start-ups have achieved so-called unicorn status with an enterprise value of at least one billion dollars. In the e-commerce sector in particular but also within the sectors of the fintech industry or the digital health economy, many up-and-coming companies have been able to establish themselves on the market, which has turned India into the third-largest start-up market in the world.

As a result, India has also become an attractive destination for expats from Germany, since German know-how is in great demand, especially in the engineering professions. Starting a job at an Indian company or at an organisation operating in India with many Indian employees is usually much easier if you familiarise yourself with the Indian work culture beforehand. With this article we want to share some tips and tricks with you so that you will quickly settle in your new job in India.

As in many other areas of everyday Indian life, you will also find clear hierarchies in most Indian offices. Although Germany is also known for rather strict rules in the workplace, the situation is fundamentally different in the two countries. In Germany, the formal work culture often finds expression in the clear distinction between leisure and work situations, which is particularly recognizable through the use of “Sie” as a formal address as opposed to “Du”.

Also read our article on New2 Germany which explains the correct usage of “Du” and “Sie”.

In India, on the other hand, things can sometimes be more informal within a workgroup, which is also due to the widespread use of English in office jobs. Within the company as a whole, however, there are often even more levels of hierarchy than in Germany. In most offices, you will not only find employees with different levels of work experience, but also a lot of support staff who perform activities such as transporting documents within the company or maintaining the workspaces. In many Indian offices, there will even be an assistant preparing chai – deliciously spiced black tea with milk – for all the employees. In addition to the great variety of tasks performed by the staff members, there can be large differences in the level of qualification of the people working at one and the same workplace. This can lead to greater disparities, and thus often steeper hierarchies, between the employees of a company than you might be used to in Germany. 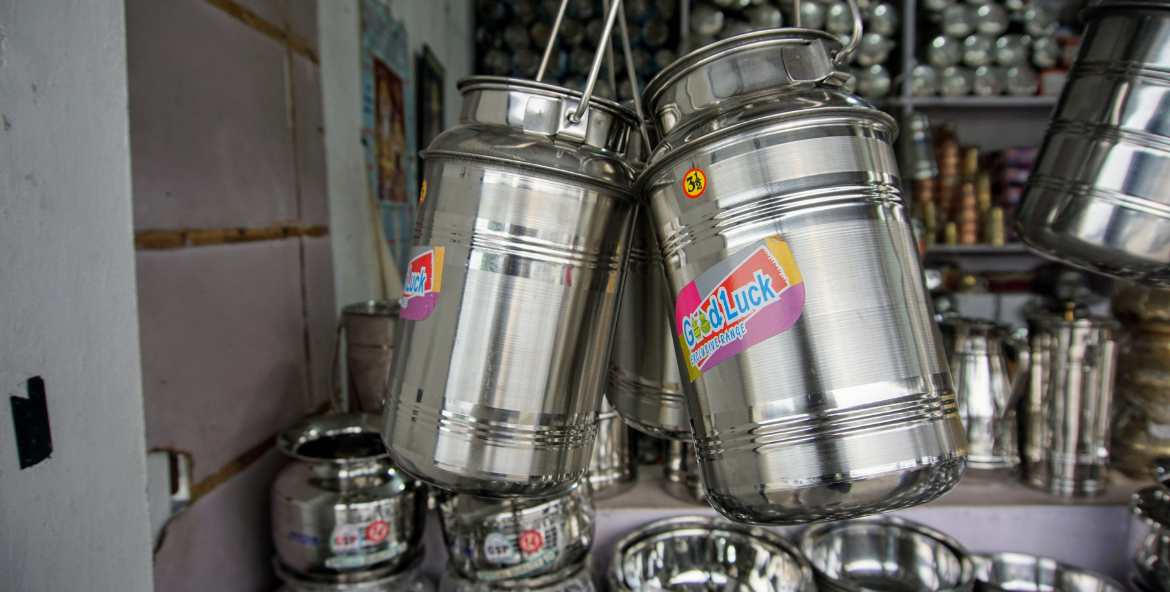 Another important aspect of everyday work life in India is based upon Indian food culture. The love of Indians for their diverse cuisine can also be experienced in the office or at the factories when all colleagues share their home-made food with each other at lunchtime. An ordinary cheese sandwich would be just as unthinkable as eating lunch all by yourself. Everything is usually shared, so everyone can enjoy dal, rajma (a vegetarian dish made with kidney beans that originated in Punjab) or various types of sabji (cooked and spiced vegetables).

Intrigued by Indian food? Check out our article on the variety of vegetarian food in India!

In Mumbai, the bustling economic and financial capital of India, local residents have come up with a particularly sophisticated delivery system to ensure that the masses of office workers can enjoy fresh home-cooked food even at far away workplaces. The so-called Dabbawalas (Dabba means box or food container) have been rushing through the city with handcarts, bicycles or aboard local trains since the end of the 19th century to deliver home-cooked dishes from the workers’ homes to their workplaces. The food is usually prepared by the spouses in the morning and then delivered to the destination at lunchtime in stainless steel containers called dabbas or tiffin boxes. These containers will not only keep the food hot, but rice and chapati (Indian flatbread) will not mix with the curries and dal dishes because the tins have multiple separate compartments. Deliveries follow a complex colour and symbol marking system, which means that almost no delivery is lost or misdelivered. Even researchers from Harvard Business School travelled all the way to Mumbai to study this extremely precise system.

Do you want to experience the local train ride in Mumbai together with the Dabbawalas? Read our guide to Mumbai’s public transport system here!

Have you ever worked in India before and do you want to share your experiences with us? Please comment below or write to us at [email protected].