How do the People in India Cope with the Current Heat Wave?

India and Pakistan are currently being hit by the worst heat wave since weather records began 122 years ago. In parts of northern India, maximum temperatures already surpassed the 40° Celsius mark at the end of March – and thus unusually early in the year. In mid-May, a weather station in India’s capital New Delhi reported an enormous peak value of 49 degrees. Very high temperatures are not unusual on the Indian subcontinent from April to June. In particular, the north of India and the wide plains of Pakistan heat up to over 40 degrees at this time. However, the current extreme temperatures exceed long-term averages for this time of the year by up to seven degrees Celsius, which can even have deadly consequences. According to meteorologists, the current heat wave will only cease with the onset of the monsoon rains that are expected to arrive in northern India by July. As a result, the residents of India and Pakistan have to brace themselves for more weeks of extreme heat. In this article we would like to introduce you to some of the centuries-old home remedies and techniques that are used to survive these sweltering summer months.

In contrast to Germany, the weather in most parts of India is characterized by three instead of four seasons: winter, summer and monsoon. In the tropical south of India, the daytime temperatures usually do not fall below the 25 degree mark even in winter from October to March. The only exceptions here are the mountain ranges of the Western and Eastern Ghats. In the north, on the other hand, temperatures can fall below 10 degrees in December and January – in particularly cold years, Delhi residents might even see snowflakes falling from the sky for a few days. From the end of February onwards, temperatures rise sharply, especially in the north of the subcontinent, before reaching around 40 degrees in the summer months of April, May and June. Only the massive rainfall of the annual monsoon, which arrives in the south from end of May and in the north from July, will bring some respite from the heat.

Before the monsoon season arrives, Indians who can afford it will try to spend their summer vacations in the mountainous regions of the subcontinent. In the south, the Western Ghats with their dense rainforests and 2000 meter high peaks are among the most popular destinations. The metropolis of Bengaluru also ranks among the prime destinations in summer, as it is located on the elevated Deccan plateau and thus benefits from milder temperatures. In the northern Himalayan states of Uttarakhand and Himachal Pradesh, the peak holiday season falls in the summer months. The main pilgrimage season also starts here from May onwards – a time when hundreds of thousands of believers set out to visit the sacred springs and important sites on the upper reaches of the Ganges river. 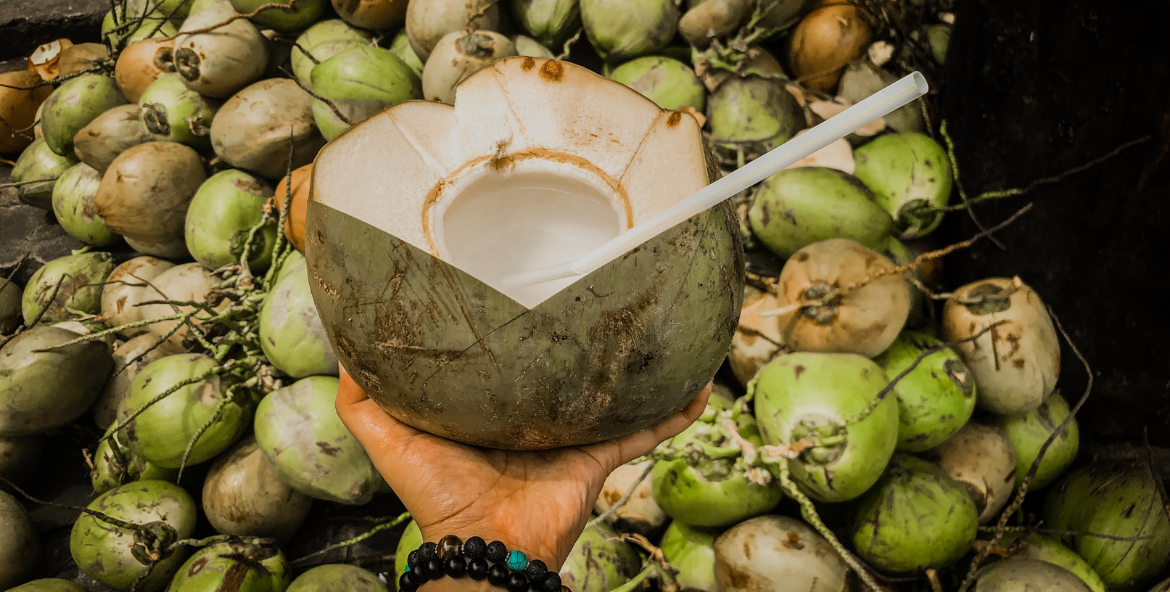 For those who cannot escape to the mountains during the summer months, there are a number of traditional recipes in South Asia that help to naturally reduce heat in the body. One of the best known traditional thirst quenchers in India is the coconut. On almost every street corner across the subcontinent you can find a wooden wagon on which the large green-brown fruits of the palm tree are piled up. The coconut water, called nariyal pani in Hindi, is not only very refreshing, but also extremely healthy, mainly because of the many minerals such as potassium, magnesium, calcium and sodium. We also have a little tip for you so that you can enjoy your next coconut even longer: When you have finished drinking the water from the nut, do not simply throw it away, but ask the seller to break it open. Sometimes the white, soft flesh is hidden inside, which you can then spoon out.

While nariyal pani is available for purchase in many places throughout the year, other drinks are only found during certain times of the year. This includes the refreshing juice obtained from the Bengal quince (usually called Bael Fruit in India). The oval-shaped fruit resembles a pear, but has a hard, thick skin. Inside is the orange-yellow flesh, from which the juice is extracted using a blender. The Bengal quince is particularly rich in proteins, vitamins C and B as well as minerals and fiber. Due to its high content of minerals and vitamins, Bael juice has been used in South Asia for centuries as a natural remedy for dehydration. The juice also has a beneficial effect on human digestion and supports the blood circulation. The Bengal quince is therefore a real miracle cure that naturally supports the human body in defying the unrelenting summer heat.

You can discover even more Indian summer drinks here. If you want to delve even deeper into Indian cuisine with all its diversity, then New2 India has a number of interesting articles for you: From tips and tricks around food in India to special dishes at popular celebrations such as Sankranti or New Year’s celebrations in India.

Do you know of any other home remedies used in countries to cool down in the summer heat? Then please comment below or write to us at [email protected]!